Skip to content
Join 150,000+ subscribers Join now to receive a weekly digest of the latest posts from Groove.

How we turned around a company that was headed toward failure

This is Part 2 of how we rebuilt Groove. Check out part 1 to get the whole story.

As a founder, the only thing worse than your company struggling is knowing that it’s entirely your fault.

As Groove quietly stagnated, I had simply believed that things would get done, but I didn’t ask the questions or give my team the resources to actually do it.

But as I watched the growth flatline, the deadlines get missed and all of the hard work we’d done for six years threaten to slowly wither, I began to realize that things needed to change.

Our challenges weren’t ones we could fix with simple tweaks or optimizations.

We’d have to go much, much deeper.

We’d need to rebuild the company.

But while I was disappointed that I had allowed the company to struggle like this, I was also, for the first time in a long time, encouraged that we finally had a path forward.

Here’s what we did.

The five changes we made to scale up

In February of 2018, with the help of my team and some key advisors, I started to make some changes to how we work:

In order to move forward, we could no longer be a “flat” organization, or one with so many gaps.

In many cases, we had a single person responsible for multiple functions that each required their own deep domain expertise.

For example, our CTO was also our lead product designer; these roles require different skill sets and each can take a lifetime to master on its own.

We needed to bring in experts for the most important functions.

We rebuilt the structure of our entire team, including engineering, marketing, customer support, customer success, product and design.

Rather than a siloed team of generalists, we put the best people possible in roles where they could specialize in what they were experts at.

Each core competency would be tackled by someone who was best-in-class at that role. 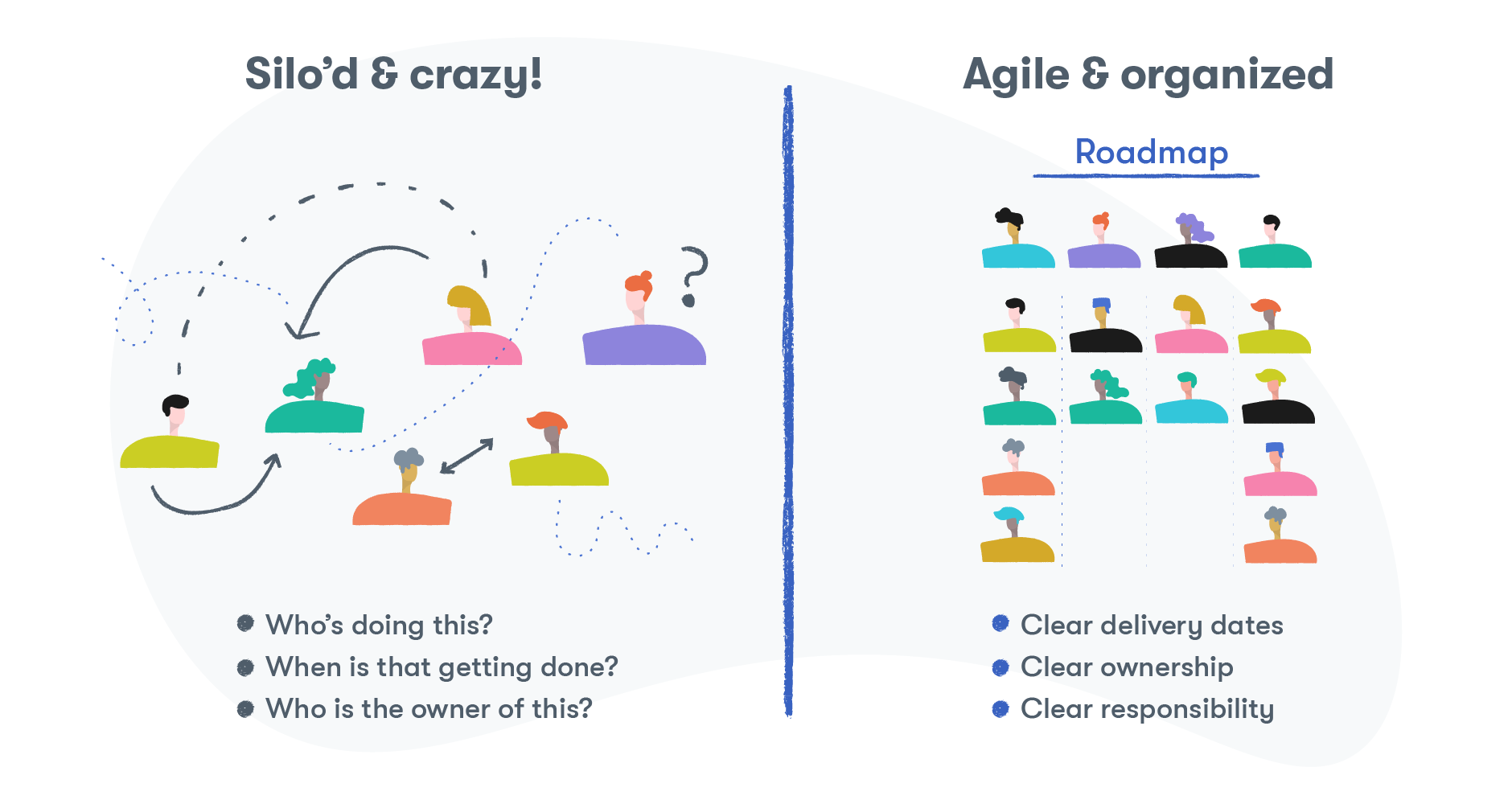 Takeaway: In high-growth companies, nobody on your team should own a role outside of their expertise. You’ll end with overwhelmed employees and sub-par results. If a role is critical to the success of your company, hire a specialist to do it.

To solve these problems, we elevated new leadership from within the company to take on more specific roles, and we brought in new skills where we needed them.

We hired experts like Nick McCreath to own the product, and Aaron Orendorff to run our content marketing team.

We identified leaders from within our team, too, promoting Marcin Bunsch to Head of Engineering and Lisa Foster to run Customer Success.

Each of these contributors brought expertise, structure and process to our formerly flat team.

It was exactly what we needed.

Takeaway: Going from starting up to scaling up will require new skills and deep expertise. Hire people with deep experience, or identify those leaders within your team. You’ll catch problems far quicker and be able to solve them before they become fatal.

Where “scrappiness” was a core value before, we evolved to work more thoughtfully and methodically.

Where “fun” was a core value before, we shifted our focus to effective execution.

(Interestingly, a side effect has been that our team is having a lot more fun as a result.)

Before we made these changes, one team member told me in a one-on-one that they felt like they were “hamsters on a wheel, running but not moving forward”. This was leading to stagnation and burnout.

While that hurt to hear, it was also one of the critical conversations that led us to work on a new approach.

Many people on our team—including me—were opposed to methodologies like agile development from day one, because it felt too “corporate.”

But ultimately, the pain we went through made us more open to “big company” things, and we ended up unlocking efficiency that has changed our business.

Of course, we still have issues, and we’re still working through them, but the difference between how things look today and how things looked a year ago is staggering.

Here’s how we used to approach product development, compared to how we do it today:

Culture change is hard and takes a toll. There’s a very real human cost to a restructuring, too.

Hopefully, most (or all) of your team members will have a role in your new organization.

But often, that isn’t the case.

Sometimes, not everyone agrees on the direction that the company needs to go.

And sometimes, you realize that the people who got you to where you are today aren’t the right people to take you the rest of the way.

The worst part—and the biggest mistake I made—was not recognizing these mismatches sooner.

As a non-technical founder, I didn’t get too involved in the trenches of our technical projects, and as a result, it wasn’t until I began to ask probing questions in our team one-on-ones that I learned that we had serious issues and that our team was woefully unprepared to work through this next stage of development; we needed new leadership.

I had to make some tough choices to part ways with a few team leads.

And while I learned that trusting your team, as I always have, is important…as a leader, it was my responsibility to the company to not just trust, but to verify that the work was being done correctly.

Takeaway: Choosing to rebuild isn’t the hardest part of restructuring; it’s the emotional side of making your customers wait, making yourself wait, and saying goodbye to talented people. Build open, honest relationships with every member of your team, and commit to regular (at least monthly) one-on-one meetings. Trust your team to do their job, but don’t neglect your job as a leader to verify that it’s getting done.

Finally, with the new structure in place, we did something that, just a month prior, would have seemed unthinkable.

We decided to tear down what we had been building, and start over again.

But this time, we didn’t lead with whimsy and a general declaration of “where we’re going.”

This time, we were throwing scrappy out the window, and doing it right:

Takeaway: Getting people excited about your vision is one thing (and, in the early days, it’s usually enough). Building the processes for them to actually march toward it is an entirely different beast that you’ll eventually need to slay.

6. Bringing in outside help

In addition to our new hires and promotions, this period of discovery made me realize that we had been missing something very important: an outside voice who could help shine a light on the problems we were missing right in front of our faces.

It’s too easy to miss issues, even massive ones, when you’re focused on your work in the trenches.

I learned this the hard way.

It was actually during a conversation with my sister, Elizabeth O’Neill (a business consultant), that she pointed out that something was clearly very wrong with how Groove was being run.

And not only did she identify that there was a problem — something I suspected — she was able to pinpoint the problem, and suggest many of the exact steps we ended up taking to fix it.

We ended up hiring her as a consultant to Groove, and her help was invaluable. The shift in our values, the reorganization, the focus on trusting but building processes to verify…these were all a result of her helping me think through the challenges we faced.

Elizabeth works with many growing companies, helping founders take back control of their business when growing pains creep in, and I couldn’t be more grateful for her help.

Takeaway: Every business has blind spots. Sometimes, they’re so deeply rooted that they’re impossible to identify on your own. Bringing in an outside expert, even if it’s for a short engagement, can pay for itself many times over by revealing dangerous issues you’ve been missing.

The impact on our company, our product, and our customers

Making these decisions was one of the hardest things I’ve ever done.

Saying goodbye to great people who had worked alongside me since the earliest days of Groove was especially difficult.

And there were other costs, too.

Ultimately, the developer and operating costs of this rebuild totaled more than a million dollars. 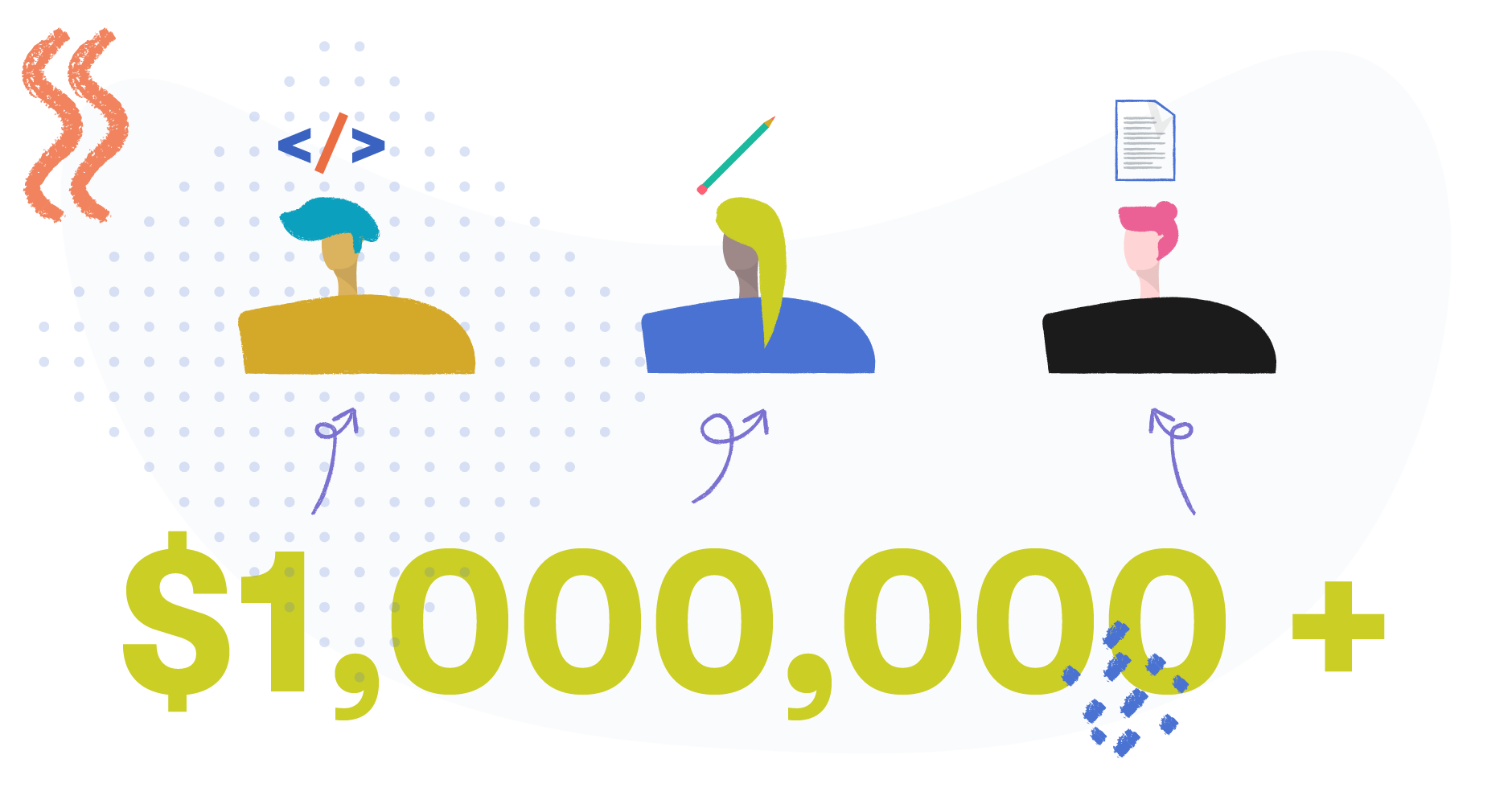 This doesn’t even take into consideration the opportunity cost of stopping our growth efforts for so long.

(If we were doing this again, I would never have put marketing on hold for so long.)

Beyond the dollar costs, the other ways in which we—and our customers—paid for this decision are staggering:

If you had told me that it would take nearly two years to rebuild Groove, I probably wouldn’t have done it.

But it would’ve been a mistake; we had to do it to survive.

And I’ve never felt luckier to have a team that rallied to pull us out of this hole, despite the high price we paid.

Where we are today

It took us two years, but things have, to put it lightly, changed.

It’s clear, in one-on-ones, team surveys and all-hands calls, that the mood of the team has shifted.

People are happier, work is getting done faster, and I wake up far more optimistic about Groove every morning.

Let’s be clear: just like any growing company, we’re far from perfect.

We’re continuing to screw up, learn, and grow.

We’re still working on key problems, like eliminating the risk of burnout and staying disciplined with our new routines, especially during crunch periods when it’s tempting to eliminate extra steps to save time.

We know that this is just another beginning on our journey.

But I’ve never felt better about where we stand today.

Instead of dreading our retreats, I’m head over heels in love with running this company, leading this team and serving these customers.

And I’m thrilled to say that we finally, after years of trying, rebuilt the product…on schedule.

We announced the relaunch a few weeks ago, and the feedback has been incredible.

Takeaway: Rebuilding is possible. And you’ll probably need to do it as you move from early-stage to scaling stage. But it won’t work unless your company’s foundation is rock-solid first.

I’m not the only founder to have gone through this.

In fact, it’s amazing how many founders I’ve spoken with have been dangerously close to walking away from what they had built, as they realized that their heart was no longer in it.

For me, that hopelessness was a symptom of our business being utterly unprepared for the growth it was experiencing.

Some people call it growing pains, but I think that this downplays the phenomenon: growing pains are never fatal, but trying to scale a broken business will kill it.

This was a near-complete failure of our company.

Sometimes, you need to fail to put yourself in a position to win.

It helped us launch a brand new Groove that’s unlike anything our customers have seen before.

We’ve spent a lot of time thinking about what customer support will look like, not just tomorrow, but in 5, 10, and 15 years.

And we’re excited to finally be getting our product, our team, and our marketing to a place where we can help our customers own that evolution.

Alex Turnbull Alex is the CEO & Founder of Groove. He loves to help other entrepreneurs build startups by sharing his own experiences from the trenches.
+150,000 of your peers are already in the know